Happy Birthday Edward Lear. Google’s reminder that today is Edward Lear’s 200th birthday is a good prompt to get Edward Lear in Albania down off the shelves, a book I had the opportunity to produce for IB Tauris and The Centre for Albanian Studies. It’s one of the book designs I am most pleased with, and still the only one that has inspired a reader to enquire (via the publisher) what font is used: Goudy Old Style. 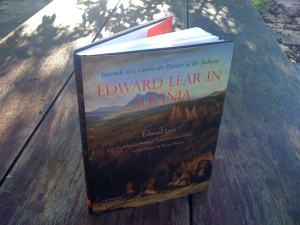 The book essentially covers the Albanian part of Lear’s Journals of a Landscape Painter in the Balkans, documenting the 15 months in 1848-9 this intrepid traveler spent exploring the countries around the Mediterranean.

In the journals and drawings he vividly describes the remote landscapes in which he traveled and the people he met along the way, and the pleasures – and many inconveniences – of journeying in such rugged and often perilous countryside.

Luxury and inconvenience on the one hand, liberty, hard living and filth on the other.

Yenidje and Vodhena, drawn at the scene in pencil, later in the studio ‘penned out’ in sepia ink then coloured using watercolor washes, based on notes he had made at the scene:

Here, in the entry for October 4th, he describes the landscape around Skodra:

Perhaps the grandest of all the views of Skodra was from the rock eastward of the bazaars; the castle, the mountains above – the ruined town below – the river winding beneath its bridges into far distance, form one of the finest pictures. As the sun was sinking low, its rays, clouded through the day, lit up the northern side of the landscape brilliantly, and from the steep castle hill – my last halt – nothing could have been more splendid than the rich foliage and glittering dwellings on the one side and the dark ranges of deep blue and violet hills against the bright sky.

Edward Lear in Albania: Journals of a Landscape Painter in the Balkans